THE CROSSINGS
▸
ABOUT
▸
Bringing My Passion to Work 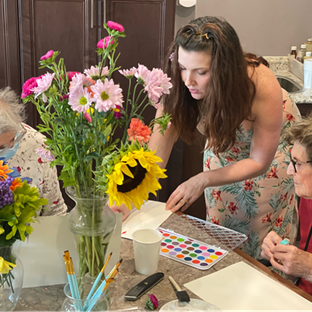 Bringing My Passion to Work

I started drawing in March of this year as an exercise to liberate myself from overthinking, comparing myself to others, and from wasting time on my iPhone. Before I started pursuing this as a hobby, I hadn't made anything since my high school days in art class. At first, I found it incredibly awkward. I just doodled and doodled.

I started adding paint to my floral illustrations and eventually developed my own personal style. Several residents would pass by the front desk and notice that my doodles had improved. I began to bring my paintings into work for them to see too. It wasn't long before Mrs. Queener, Ms. Bosse & Ms. Raiman had become my biggest fans. I shared my passion with a team member, simply stating that I love spending time with our residents and would love to just sit and paint with them. She suggested that I teach a class. I was so excited that I was invited to bring my passion to work.

Creative expression is an innate gift that belongs to every child, but for most people, as we age, it becomes more about "perfection" than the joy it brings. Insecurity sets in and we begin to say, "I'm not artistic," or, "I can't draw a stick man". When our focus is on not feeling good enough, we miss the joy of expressing ourselves through art. A very close friend of mine compared my drawing to my handwriting. It's quirky, imperfect, even haphazard and messy sometimes, but it is uniquely mine.

My goal with this class is to uncover this lost creativity. I want to witness them finding their own "handwriting," if that makes sense. I want the attendees to gain some comfort with working with watercolors - controlling the brush, mixing colors, ratio of water to pigment, working with the imperfections instead of just throwing it away and starting over. I want to see them using the things they learn to make something for the pleasure of... just making it. I am not a professional and have only been doing this for about four months. But that doesn't matter! I'm here to learn - just as they are! It's therapeutic and it's FUN!